Ryen Lamb insists that one of the most comfortable places she can find herself is sitting behind the wheel of a dragster, traveling at speeds in excess of 180 miles per hour down a quarter-mile length of track.

In the cockpit of a race car, she’s held in place with a five-belt harness in a seat that’s custom made to fit her form. When she hits the throttle, she’s thrust down the length of the track, and within seconds has finished her run often beating out her opponents in the male-dominated sport.

Before she began attending law school in 2016, her life consisted of drag racing 20 to 25 weekends of the year. 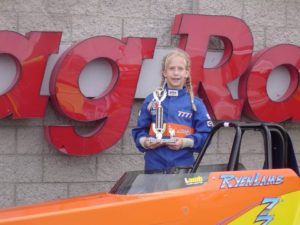 “I grew up in drag racing, with junior dragsters, little mini ones with lawn mower motors,” she said. “Then I shied away from it for a while and did gymnastics through high school until I ended up getting hurt.

“Who would have thought that a 200 mile-per-hour racecar is safer than gymnastics?”

When Lamb, 25, graduates later this month from the College of Law with her juris doctor degree, she doesn’t plan to return to the Las Vegas area – the drag racing capital that is home to the rest of her racing family. Instead, she plans to continue to work for the Winchester, Sellers, Foster, and Steele law firm in Knoxville where she’s been employed since her second semester of law school.

At the firm that specializes in commercial, banking, bankruptcy, and creditor’s rights law, she has found her niche drafting contracts, working on business acquisitions, and helping businesses regain solvency after bankruptcy.

And interestingly enough, she says her racing skills have transferred well into her work by helping her control her focus.

“Being able to key into one thing at a time is so important in this work,” she said. “For me, the struggle has always been thinking too far ahead.”

But dragster drivers must live in the moment and take one step at a time, she said.

“Races are won and lost over ten thousandths of a second,” she said. “So if you’re focusing on the finish line, or what the other driver is doing, you’re going to mess up at the beginning. 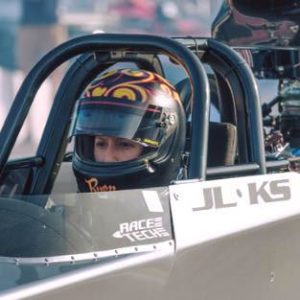 Lamb’s career in racing has been successful enough to land her attention from industry insiders. A wreck at the Spring Fling Vegas in April 2013 had some wondering if she’d return to the sport.

She recalls the day clearly. Her brother, Justin Lamb – one of the National Hot Rod Association’s most acclaimed drivers – had just warned her that the weather was making the car run faster than usual.

She started strong and sped down the track to win the heat, but after she passed the finish line she hit a patch on the pavement that had taken out another car earlier that month.

“I rolled and hit the top of his car, slid over the top of him, and bounced on the wall,” she said. “The car started to fall over, but it just slid 200 feet or so.”

While emergency professionals and Lamb’s family sped toward her to assist and assess the damage, Lamb crawled out of the car and walked away from the accident with only a few bumps and bruises.

Jenna MacNair, one of Lamb’s classmates who will also graduate from the College of Law in May, said she initially had a difficult time envisioning Lamb competing in such a dangerous sport, at home behind the wheel of a dragster.

“I sat next to her during orientation and overheard her tell another new student that she races cars,” MacNair said. “I was just so taken aback that the tiny, outgoing girl sitting next to me in a button down and a blazer spends her weekends drag racing.”

MacNair hasn’t yet had the opportunity to see Lamb on the track, but she said she and other law students are making plans to watch Lamb the next time she races.

“I have no doubt she that she’s a force on the race track,” MacNair said. “Ryen has this calm, confident energy about her … If anything, I think her skills as a national racecar competitor have made her a better law student.”

While Lamb’s focus for the last three years has been on studying, earning her law degree, and now passing the bar examination, she said it’s likely that she’ll soon take racing off “the back burner.”

With Lamb’s family’s racing team based in Nevada, she’ll have to figure out the logistics of maintaining and possibly transporting her dragster thousands of miles. But within the industry, plenty of teams share their cars when their own drivers are out of commission, she said.

“I could race other people’s cars, but in terms of getting my own car out here, it’s not impossible,” she said. “There are options. We’ll see.”