Grad walks away from pro umpire career to study law

Seventeen years ago, Jordan Ferrell had a clear career path.

Eventually he advanced to calling college baseball, went to umpire school, then began working with the minor leagues.

In the off season, as an undergraduate college student, he was a pre-med major.

“I was miserable in undergrad, and I knew I didn’t want to continue in that field of study, but it took me until my junior year to realize I wasn’t happy,” he said. 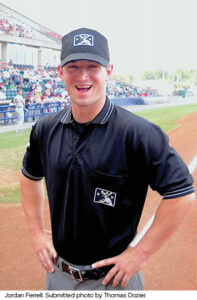 After completing his bachelor’s degree in history in 2006, Ferrell focused on becoming a major league umpire. He progressed to the triple-A level in the minor leagues and spent months traveling the country with a crew of other officials, sleeping in different cities every week throughout each three- or four-night series of play.

Between 2007 and 2015, his strong work ethic and commitment to craft made him a valued and trusted official who was offered crew chief assignments, earned postseason awards, and worked winters in warm weather with the Hawaii Winter League.

Finally in 2013, he was asked to umpire a few major league spring training games and did so for the next two seasons, but his opportunity to advance beyond that was cut short.

“The timing just didn’t work out,” he said. “As an umpire, you have a very limited amount of time when you can be on the dance floor, and nobody wants to be a triple-A umpire for all their life.”

It was then that Ferrell decided to consult with Dan Bellino, a major league umpire for the last nine years, who is also an attorney. Landing an umpire position with Major League Baseball is similar to that needle in a haystack, he said.

“From 2000-2010, there were only two openings for officials,” Bellino said, “so the percentages aren’t good.

“If you’re in the right position at the right time, if someone retires and an opening surfaces, it’s a rare opportunity. We had four new hires this year, and that was only because it was part of our collective bargaining agreement.”

Bellino said several others have consulted him throughout the years about how to balance the baseball and legal fields, but Ferrell is the only one who followed through.

“When Jordan took the LSAT and told me how he scored, I told him ‘You’ve got to do this; you need to do it,’” Bellino said.

As a law student at the University of Tennessee for the last three years, Ferrell has been surprised by the correlations between his interests. Both officiating and lawyering have strict sets of rules that have to be understood and correctly applied, and both require skillful interpretation of those rules.

Most importantly, Ferrell said, is understanding the human element.

“Where you separate a great umpire from a good umpire is in how they deal with people,” Ferrell said. “You will not succeed if you insist on always going by the book. The same is true with the law. You have to apply people skills to talk people out of bad situations.”

Law Professor Alex Long got to know Ferrell during discussions about how baseball and the law intertwine. Those talks eventually influenced Ferrell to write a paper examining foul ball netting at major league parks and the responsibility of owners and stadiums to keep the public safe. His paper, titled “By Responding to Fans’ Needs, Baseball Owners Get Out of a Bases-loaded Jam,” was published last year in The Sports Lawyer Journal.

Long edited Ferrell’s drafts and saw how the student strived for perfection in his writing.

“He is super responsible, really respectful and serious-minded,” Long said. “Someone who comes to law school with meaningful prior work experience has developed a work ethic out of necessity. And that gives them a seriousness of purpose. Jordan definitely fits that description.”

Ferrell has not stepped completely away from baseball. He continues to umpire college baseball (when the season isn’t preempted by a worldwide pandemic), and he serves as vice president of the Association of Minor League Umpires Union.

He said he’s glad to have this summer free, the first in 17 years, so that he can study for the bar exam and begin his legal career at the Baker Donelson law firm in Nashville where he’ll work in transactional law.

“I can’t speak to where my career’s going to take me, but I know as long as you enjoy the work and you enjoy the people, you’re going to be happy,” he said.

Bellino is disappointed to see Ferrell leave behind his dreams to work in professional baseball, but he’s certain that Ferrell will succeed.

“I’m very, very proud of that young man. To leave the minor leagues, and go back to school with the discipline and the mental toughness that requires is incredible,” Bellino said. “That young man inspires me. And I can’t wait to see what he becomes.”