On the Record with Joel Katz

Stars adorn the walls of the College of Law. No, not the kind that fill the night sky, but the framed records of musicians whose songs have filled the airways and contributed to American pop culture. These silver, gold, and platinum records serve as a permanent testament to some of music’s greatest hits, and despite the differences in genre and even era between the artists, they all share one thing in common: the attorney behind the musicians.

That attorney, Joel A. Katz (’69)—who gave these framed records to the college from his collection and for whom the college’s law library is named—is Billboard’s top-ranked entertainment attorney and one of UT Law’s most prominent alumni.

The career of Joel Katz is a faithful testament to the American Dream. During law school, Katz faced hardships and nearly flunked out. At the beginning of his career, he found himself with no clients in an Atlanta office “the size of a restroom stall,” barely living off his savings. However, it was his resilience and entrepreneurial spirit—not to mention a bit of luck—that transformed him into an entertainment mogul with unparalleled experience in the world’s “most fickle business.”

Tough with a Heart of Gold

A Queens native, Katz attended Hunter College in New York City and graduated with an economics degree in 1966. Like his father, Katz aspired to become a lawyer, and that summer he arrived in Knoxville in pursuit of a law degree.

To finance his legal education at UT, he took on two jobs: a part-time position at the college’s library and a full-time, six-days-a-week position from 6:00 p.m. to 6:00 a.m. as a hotel night clerk. Though Katz was able to keep up with his studies, his punctuality suffered, leading to a confrontation with his contracts professor, Colonel R. McDonald Gray.

“He was a very prim and proper military guy, and he had a rule that if you were late three times, you got an automatic ‘F,’” explains Katz. It was early in the semester when Katz reached his third tardy, a fact the colonel announced to the entire class. “I was so embarrassed,” Katz says.

Tennessee will always be really important to me and taught me how I want to treat people.

Still, he asked Gray for permission to sit in the class and listen for the rest of the semester so that he would be better prepared to retake the class. The colonel obliged. After class, Gray privately interrogated Katz about his frequent tardiness. Once Katz explained his night clerk position, which only allowed him an hour or two of sleep at dawn, he saw an astounded look on the colonel’s face.

“I’ll never forget it. He said to me, ‘You’re not going to get an ‘F’ in my class, son. You want to be a lawyer more than anybody else in this damn law school. You’re going to be a great lawyer, so I’m not going to flunk you out of my class.’”

Colonel Gray became like a patron saint to Katz. One semester, Katz’s brother fell severely ill, warranting Katz’s return to New York at the cost of failing nearly all of his classes. The colonel testified before the administration, speaking to Katz’s character, and garnered him readmission to the college. The following semester, Katz made the dean’s list.

“That’s why I feel really close to UT Law, because everything I’ve done [in my career] I never could have done if that man and that school didn’t have a sense of goodness and kindness towards me,” says Katz. “Tennessee will always be really important to me and taught me how I want to treat people. I’m tough, but I think I have a pretty good heart, too, just like the colonel.”

The Man Who Would Be Counsel

A few years after graduation, Katz was a small-time attorney in Atlanta sharing a secretary with three other lawyers in a cramped office with no clients. A former student of Katz’s from Georgia State—where Katz had been a lecturer on urban law—told him about a client who was looking for a lawyer who had never practiced entertainment law.

“[He told me], ‘We represent an entertainment superstar, and he’s been burned by the people in New York and the people in California. He’s from Augusta, Georgia, and only wants a lawyer from the South,’” recalls Katz. Upon learning that the client was the legendary James Brown, Katz found it hard to conceal his amazement. “In 1971, James Brown was the equivalent of Taylor Swift and Justin Bieber all rolled up together,” he says.

I knew at that moment why James Brown had hired me: because no lawyer who knew anything about this business would ever go in and ask for the things he wanted.

Katz tried to read up on entertainment law as much as he could before his meeting with the Godfather of Soul at the end of the week. When he arrived at Brown’s downtown hotel suite, the star was having his hair styled. “He took one look at me, and he knew exactly what I was: a guy who didn’t know nothing.” Brown hired Katz on the spot.

Soon after, the two headed to New York, where Brown hoped to sign a contract with the then new record label PolyGram, a joint venture by Philips and Siemens. However, Brown’s demands were steep.

“He said he wanted a $5 million advance against royalties, he wanted a jet plane, and he wanted to own the master recordings and the publishing rights,” says Katz. “I went through the list with the [PolyGram lawyer], and he looks at me and says, ‘Are you completely out of your mind? This is the stupidest, craziest, most egregious list of things I’ve ever heard in my career!’

“I knew at that moment why James Brown had hired me: because no lawyer who knew anything about this business would ever go in and ask for the things he wanted.”

Nevertheless, Katz was invited to dinner with the PolyGram lawyer later that evening, where, with a fair amount of negotiating, most of Brown’s demands were met with small modifications. Soon, Brown became PolyGram’s first recording artist. At the press conference announcing the deal, Brown profusely thanked Katz, telling the press that Katz had “just made the biggest deal for an artist in the history of the recording music business.”

The Art of Law

Upon his return to Atlanta, word of Katz’s unbelievable deal began to spread through the entertainment industry. Only a few days later, Katz found himself in Austin, Texas, with Willie Nelson, who wanted to utilize the skill of “the Godfather’s lawyer,” to sell his album, Red Headed Stranger, to Columbia Records. Through Nelson, Katz was introduced to George Jones, Tammy Wynette, Waylon Jennings, and Kris Kristofferson.

“I put them all on retainer for $2,000 a month, every one of them,” he says. “And Willie said to them all, ‘This is our lawyer, this is our guy. He’s going to look after us.’ And they became lifetime clients.” 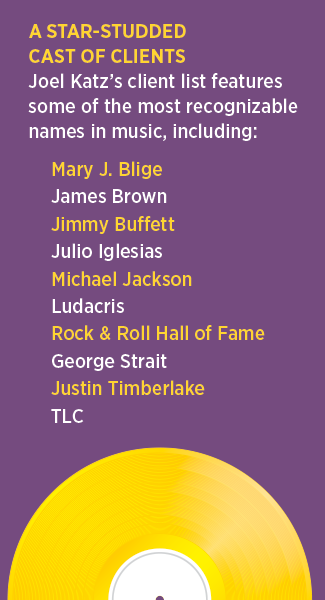 In time, Katz realized the amount of work on his plate was too much for one attorney. In 1981 Katz founded his own firm, Katz, Smith & Cohen, which he ran until 1998, when the firm joined Greenberg Traurig.

“My theory about practicing law is that it’s an art form, and it’s also a business. But without clients, you don’t have a business. So the most important thing in the world are clients and treating them well, treating them like family, and making sure that they understand everything you are doing,” Katz says. “I never tell people I’m a lawyer. People ask, ‘What do you do?’ and I say, ‘I’m an architect surrounded by lawyers. I create things, build them, and then my lawyers close them up.’ That’s the way I look at my job.”

In recent decades, Katz has expanded his areas of practice to international issues.

A lawyer now for more than forty years, Katz says he’s mindful about taking care of himself and choosing how busy his schedule is.

“As you get older, you just learn things. You can’t just sit on the sidelines and watch life go by. You’ve got to live it and do everything that you can do based on your education, the experience that you have, and based on what you think you can do well,” Katz says. “I’ve also learned that you treat everybody the same in life. You treat the waiter the same way you treat the president of the United States. And you know what? That works.”